By now we’ve all seen the best selfie ever. (See below in case you have been living under a proverbial rock.)  How could you not love this photo? The spontaneity, casualness and silliness of it made it go viral instantly.  So much so that it not only set the record for the highest number of retweets (more than 2.5 million right now and 700,000 in the first hour), which was Ellen’s goal, but it also crashed Twitter. 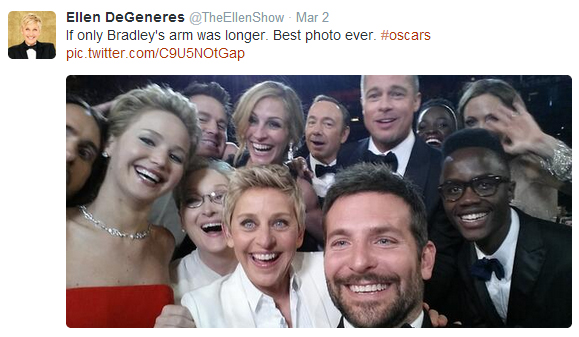 Totally. Brilliant.  Ellen is a social media super star, which is not news to anyone.  And apparently so is Samsung.  When the brand signed on as a sponsor for the Academy Awards, the intent was to introduce the brand’s new “One Samsung” campaign via commercials.  But that wasn’t all Samsung was up to.  The brand also eagerly handed over a brand new Samsung Note 3 for Ellen to use during the broadcast to tweet, take pictures and show off to the audience, live and at home.  And boy, did it pay off.  The newest Samsung phone received a ton of camera time, plus lots of love from Hollywood’s elite. Using her normal quirky charm, Ellen managed to work the Samsung Note 3 into the production without it seeming too obvious or annoying, and the Monday following the Oscars Ellen gave away a new Samsung Note 3 to each member of her studio audience. Samsung indicated that execs were extremely pleased with the unplanned selfie and, according to an article in today’s L.A. Times, the brand is happily donating $3 million ($1.5 million each) to two charities of Ellen’s choice. Bottom line: Ellen found the perfect way to tie an event, a brand. a product, an audience and much of Hollywood together in a fun and emotionally-bonded way.  Well played, @TheEllenShow.  Well played.